Crime is part of the “3C” factor that played a role in the Barisan Nasional government’s moral defeat in the 12th Malaysian General Election in March 2008 (Lim & Har 2008). Prior to that, an opinion pool commissioned by The Star newspaper in December 2007 reported that the three most concerned issues to Malaysian are cost of living (as claimed by 96% of the respondents), followed crime rate (88%) and illegal immigrants (40%) (Zulkifli Abd Rahman & Florence A. Samy 2008). On crime, Malaysians generally have not satisfied with the crime rate. Statistics from the Royal Malaysia Police are summarized in Table 1. As per Table 1, total crimes, rape and property crime accelerate in year 2006 and 2007. If year 2004, the year of the prior 11th general election is used as yardstick, total crimes have increased 33.94%. Increase in rape cases is even more alarming at 84.92%. Perhaps, a laymen voter might not understand or have exact access of these statistics, but their fear of crime and their family members (especially the daughter) safety have been part and parcel of their life, hence further boiling their dissatisfaction towards the government. 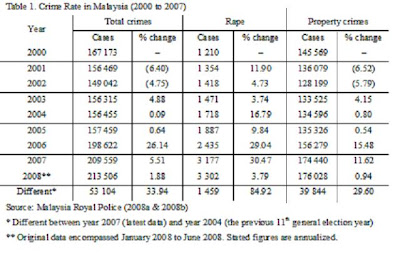 Nevertheless, the eruption of dissatisfaction and fear on crime concerns in Malaysia could be due to few high profile crime cases involving brutality against women and children. Example of those cases include the murder of Mongolian Altantuya Shaariibu (body was allegedly blown up by military-grade explosives, case still pending hearing), Canny Ong (rapped, stabbed and then dumped into a manhole to be burned to dead on 14 Jun 2003), Nurin Jazlin Jazimin (8-year old, reported missing since 20 August 2007), Nurul Huda Abdul Ghani (10-year old, brutally raped and murdered, Jan 2004 case) and Sharlinie Mohd Nashar (five-year-old, reported missing on 9 Jan 2008). Besides, gang-rape cases also widely reported in Johor Baru, the capital city of Johor state. A series of rape cases in June 2007 particularly terrified the residents of Johor Baru. On 12 June 2007, three men raped a 19-year-old girl and forced her 22-year-old boyfriend to watch helplessly, after he had been slashed twice. The following day, a group of armed men took a couple on a terror ride before raping the 35-year-old woman in the presence of her friend, who was slashed. On 20 June 2007, a schoolgirl was raped by four men and another by a bogus policeman in two separate incidents within a six-hour period (The Star Online 2007 & Farik Zolkepli 2007).

Based on the annualized half year data (from January to June) for 2008, the crimes continue to increase but the year-to-year rate of increase seem slowed down significantly for all the three category of “total crime”, “rape” and “property crimes”. Annualized method is used due to unavailability of up-to-date figure on crime rate. Nevertheless, scenario for the second half of year 2008 could be greatly different from the first half of the year, with added hardship to living standard such as sharp increase of petrol price (despite being reduced significantly months later) and economic crisis looming. Hardship and crimes generally have positive relationship, hence not surprisingly that some qualitative news (including individual’s everyday experience and those reported in media) indeed pointed to a rising crime happening in Malaysia. The Star newspaper (24th November 2008) reported that Teratai assemblyman Jenice Lee marched peacefully with 40 other residents to the local police station to submit a memorandum on the rise in the number of crime incidents in the area, highlighting 50 recent cases the residents want the police to act on (Aziz 2008: M7). Another random example of crime cases, The Star Online (10th November 2008) reported that residents in the Jalan Dharma and Lebuhraya Bodhi areas in Penang are living in fear after thieves broke into three houses over the past three weeks.

Further on crime and police matter, a debatable case worth mentioned. Malaysiakini (Ghazali 2008) reported that on 16th Oct 2008, the Home Minister Syed Hamid Albar was mauled by the opposition when he revealed in Parliament that the police beat along the infamous Lorong Haji Taib ceased operations because its personnel were exposed to contagious diseases and safety risks. This was related to the closure of police beat in the notorious Chow Kit area in Kuala Lumpur, which the reasons are varied. Some versions claimed that the closure is “due to fear of criminals or health concerns” but the Home Minister later clarified that “the 'right' reason was that the owner of the building (police beat station) wanted to build shop houses in the area.”

Regardless of what had happened, prevention is better than cure. Hopefully, all parties from ordinary citizen (especially helpless children, students and golden citizens) to higher authority such as the police, Member of Parliament and Ministers responsibly play its part to fight crimes in Malaysia.