Brain drain is defined by World Bank as the emigration of high-skill individuals above 25 years of age with an academic or professional degree beyond high school. Brain drain is not new to Malaysia. This issue has been debated in Parliament by policy makers as well as coffee shop by laymen since years ago. On the other hand, Home Minister Datuk Seri Hishammuddin said as of 31 July 2012 there were 1,581,264 legal foreign workers in Malaysia. 48% are made up by Indonesia, Bangladesh of about 18%, Myanmar of about 7.8%, Nepal for about 7.8%, India of 7% and remaining are Vietnam. The number provided actually excludes spouse or children of these workers that are smuggled into the country. The foreign workers in Malaysia are mostly semi-skilled or unskilled workers.

However, in our pursuit to be a developed nation by 2020, we need a lot of talents or skilled labor, both developed from our internal education system and brain gain from aboard.

However, the reality is completely opposite. These few highlights from World Bank’s Malaysia Economic Monitor on April 2011 look scary.

The success of ETP and its many NKEAs require many talents. Thus, this transformation program does aims at attracting Malaysians working aboard and skilled foreigners to come to Malaysia.

Brain drain issue is highlighted in one of its six Strategic Reform Initiatives (SRIs) of the ETP, namely “Human Capital Development”. Other than that, the Economic planning unit is also leading the establishment of the Talent Corp Malaysia Berhad (TalentCorp) which has job to be a coordinator between the program and the skilled workers overseas.

The government through ETP, TalentCorp and other policies will take few actions to attract expatriate by:

Deeper analysis will reveal that those efforts are not enough because they only focus on one aspect – the monetary incentives. For example, returning experts are offered to buy a car without tax, flat 15% tax rate for five years and permanent resident status for their wife and children who is not Malaysian citizen under the “Returning Expert Program (REP)” scheme. Yet, between 2001 and 2010, there is only 1130 applicant for REP. Perhaps, the government targeted wrong countries. Among the top seven Malaysian emigrant countries, TalentCorp did not focus on Canada, Brunei and New Zealand. Perhaps also that brain drain is more than monetary factor. Other factors like perceptions and fear do play important role.

Perception of “Moon overseas is brighter and better”

People in Malaysia especially professionals that are highly demand by foreign countries also perceive that working in well-developed country like Singapore, United States, United Kingdom, Canada and Australia is better. We can always hear citizens of Malaysian discussing about their siblings, children or relatives working outside of the country who earns better income and bring better prosperity to the family. Moreover, they tend to think that working in foreign country brings their family better reputation and quality of living.

It might be due to the high wage rate and also exchange rate in foreign companies, talented Malaysians strive to work in foreign country. Not only that, they are proud of themselves for able to get a job at developed country, especially with a reputable international company.

“The foreign country moon is often being brighter and beautiful compared to the one you’ve seen in your own country”, this Chinese quote explains this perception, which ETP should take into consideration.

Fear of unemployment or underemployment

The unemployment rate in Malaysia for the 3rd quarter of 2012 is as low as 3% but unemployed university graduates in Malaysia remains high at nearly 15% of total unemployed in the country. The actual number will be about 71,600 graduates.

There are few common reasons for unemployment for fresh graduates in Malaysia highlighted by several researches. For example, Malaysian fresh graduates often demand for unrealistic salary, flexible working hours and poor in English language. High inflow of foreign labor further causes fear of underemployment (employed for lower skill job with low salary and bad working condition). These act as push factor for brain drain. Thus, welcoming foreign skill labor or professionals under ETP could backfire by increasing this fear to both local skilled and unskilled labor.

The “3C” in English are cost of living, crime and corruption. An opinion poll commissioned by The Star newspaper in December 2007 reported that the three most concerned issues to Malaysian are cost of living (as claimed by 96% of the respondents), followed crime rate (88%) and illegal immigrants (40%). Meanwhile, corruption does deteriorate welfare and create unfair competition in business and employment market.

There are higher potential for the wage rate in Singapore to rise if it is to compare against Singapore’s GDP per capita as of January 2012 which is ranked as world no.6 for USD 60500. However, Malaysia ranked world no.76 for USD 15800. Some of Malaysians even go back and forth to work in Singapore from their home in Johor Baharu just to gain higher wages to fence off high inflation in Malaysia and avoid high rental expenses in Singapore.

In some industries such as Chinese entertainment and Chinese small and medium (SME) businesses, talents often fail to find their ambitious suit industry or company’s needs.

For entertainment industry, if the artist becomes famous, they tend to leave Malaysia to country like Taiwan, Hong Kong or China for better expansion of their career pathway. As for Malaysian Chinese SME businesses such as in pharmaceutical or aircraft manufacturing field, research and development seldom involve given priority. If the talented Malaysian that studied abroad with these qualifications wished to come back to serve in the country, Malaysia might not have a suitable job for them.

Other than that, some of the SME in Malaysia thinks that employing talented people in their company is a waste of capital when they calculate according to the cost-benefit analysis. Most of the SME in Malaysia prefer hiring low-cost foreign labor. Even if the company is dealing with manufacturing, they do not seem to employ engineers in the manufacturing plant. Some of the SME claimed that they do not use so much talent that are equipped by the professionals, but still, the salary will be a standard rate which is considered high.

Decades of old problem cannot be solved in few days time. Yet, time is running out for Malaysia and ETP to achieve its target in 2020. Hope that the government and ETP will see brain drain, especially among Chinese talents are not merely caused by monetary factor but various others pull and push factors. 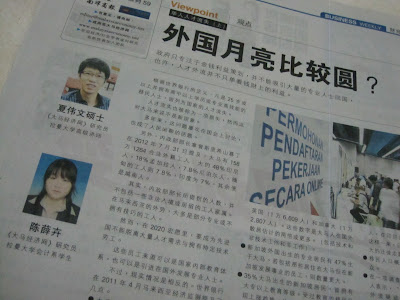