The recent Sarawak state election and 1-Malaysia concept share one common thing. In both case, rhetoric suppress the reality truth. With “I help you, you help me” trademark of helping hands from top guns in the Barisan Nasional (BN), Taib Mahmud has led his coalitions to retain their two-third majority despite much hype of Sarawak wind of change from Anwar’s Pakatan Rakyat. After all, not all earthquakes will result in tsunami.

Taib’s PBB won all 35 contested seats while BN as a whole won 55 seats. PKR won 3 out of 49 seats contested, a mere 7.7% but that percentage does not reflect a failure due to two reasons. First, it is an improvement from previous election results. Secondly, PKR may be “force” to fill in candidates in many impossible-to-win areas just to deny uncontested victory for BN, which may serve as a demoralizing start for Pakatan coalition. DAP seem the biggest winner, doubling their seat to 12 after contesting in 15 areas while PAS may have to do soul searching after losing all their 5 contested seats. Perhaps, West Malaysia is not its cup of tea or PAS is not the cup of tea for the Sarawakian. Yet, the biggest looser is tagged to SUPP, a component party of BN who lost almost all of their urban Chinese majority seats to DAP.

Deeper beyond those figures reveal an interesting implication – the malady of 1-Malaysia concept. Despite Malaysian not really knowing its actual meaning, 1-Malaysia loosely called for national unity without racial distinction. Malaysians of different ethnic groups are urged to consider themselves as “Malaysian”. If that so, the DAP will be puzzled over its differences with their own “Malaysian Malaysia” concept of forging Malaysian race with universal moral value. Nonetheless, Sarawak state election results implied that all-in-one unity version of BN is a merely a political gimmick.

Firstly, BN top political leaders from both Peninsular and Sarawak urged the Sarawakian to reject “foreigner” parties of the East, namely the trio of PKR, DAP and PAS. This call clearly and ridiculously endorsed a two-Malaysia by the creator of 1-Malaysia itself. Declaring additional holiday for Malaysia Day (where Sabah & Sarawak are drafted into Malaya) in addition to Independent Day (where Malaya/Peninsular Malaysia gained independent) is another endorsement of differences between Peninsular and Sabah-Sarawak.

Secondly, BN politicians and its pro-establishment media (particularly hardcore Utusan Malaysia) and Pertubuhan Peribumi Perkasa Malaysia (Perkasa) keep on blaming-cum-threatening the Chinese before, during and after the election for supporting the Pakatan Rakyat in general, and the DAP in specific. The election ended with BN retaining all the 27 Malay-Melanau seats while one of its component parties, the Chinese dominated SUPP won only six of 19 contested seats. Among the six seat won, four are secured through Dayak candidates in Dayak-majority areas of Opar, Bengoh, Simanggang and Engkilili (see The Star, 17th April 2011: N4 – N6). Despite the reality does indicates that Chinese voters generally favored Pakatan, racist actions by these media and politicians would not unite the different ethnic groups nor win them any future support but in contrast, fertilized the racial tension. This is not healthy. Making it worst is that the government did not reprimand them. Worst still, Perkasa openly blame the Chinese “repaid milk with poison”. Deputy Chief Director of Utusan Malaysia, Zaini Hassan challenged UMNO to establish “1Melayu, 1Bumi” immediately. Therefore, while hitting hard on Anwar’s ceramah, silence to racist media is not only a clear example of selected prosecution but also a mockery to Malaysian and 1-Malaysia concept too. Furthermore, having “race” and “religion” identification in various official matters from MyCard detail to procurement tender merely reaffirmed the government hypocrisy. Of course not to be missed is former Prime Minister Mahathir Mohamad’s shot at DAP as “racist” party without reflecting the fact that three main component parties of BN are race-based.

Indeed, the first genuine effort towards 1-Malaysia unity was the unsuccessfully attempted by Onn Jaafar, the founder and first President of UMNO. In his speech in the UMNO’s half-year General Meeting on March 1951, Onn Jaafar proposed to open membership of UMNO to the non-Malay and renaming UMNO to “United Malaya National Organization” [see Mohamed Abid. (2003). Reflections of pre-independence Malaya. Subang Jaya: Pelanduk Publications]. He reminded the Malays about some plans like establishment of Labour Party or Progressive Party that did not limited their membership to one ethnic but open their doors to anyone that are willing to abide by the party’s rules. Hence, he urged UMNO members to “open its door before its door is being closed by other peoples” (Mohamed Abid 2003: 180 – 181). However, his proposal went unheeded resulting Onn Jaafar left the party on August 1951 to form the multiracial party, Independence of Malaya Party (IMP). IMP failed subsequently, implying that communal politic triumph over multiracial.

Thirdly, the Sarawak state election did reveal to some extent of rural-urban electoral divide. Sarawak urban voters regardless of race seem supported the Pakatan coalition. This trend was even acknowledged by Lim Guan Eng. An example is DAP and PKR collectively won all five seats in Kuching area but DAP lost at Bawang Assam, a rural Chinese majority seat. Implication from such divide actually put our democratic system integrity in the balance. Deeper understanding of this divide is that BN-led government is endorsed by less informed, less developed rural voters. This group of voters can be easily brainwashed with waves of propaganda brought by BN-controlled mainstream media. Poor areas dwellers may be dependent on government grant and fund (or electoral goodies). Couple with some element of greed (particularly those ketua kampung or penghulu), choosing elected representative is no longer efficient, fair and utilitarian matter. In contrast, democratic practice in Malaysia has been a deceptive and self-greed centric. Hence, no wonder money politics prospers in this country, most notably during election. During any types of election in Malaysia, try to spot for 1-Malaysia NGO goodies van in election areas or “You-help-me-I–help-you” pledge in BN political ceramah. Do not surprise to find sexy girls stage show and lucky draws in BN’s makan malam (political dinner) too.

Nonetheless, while blame is heavily put on the Chinese ethnic and urban dwellers for BN defeat, a renowned associate professor of political science at Singapore Management University, Dr. Bridget Welsh begs to differ. She dismissed both the dichotomy of ethnic and rural-urban divide to highlight that the Chinese swing toward the opposition is comparatively less than the changes within other communities. Examples given included swing of Orang Ulu communities towards PKR in Ba’kelalan while increase in Iban support for BN in Engkilili. Pakatan triumph in rural and semi-rural seats of Ba’kelalan, Krian, Batu Kawah, Dudong and Paisau are examples to dismiss rural-urban divide hypothesis.

Forth, Dr. Bridget Welsh believed that “youth revolution” is the important dynamic in this Sarawak state election. Her estimates showed support from older generation to Pakatan is 42% as compared to younger generation at 73%. Comparing with 2006 election, increase turnout by the younger generation resulted in Pakatan gaining 5.6% and 26% respectively from old and young generation. Overall, popular votes to BN dropped eight percentage points from 63% in 2006 election to 55%. This state election came before Gawai (the Dayak’s harvest festival celebrated by Iban & Bidayuh on 1st June). Therefore, Dr. Bridget Welsh further believed that if the election is held at later date, impact from younger voters who work outstation coming back to Sarawak will be worrying BN. Interesting question for thought is that will this youth revolution sustainable? If yes, will BN reign in Malaysian politic comes to an end sooner or later?

Fifth, dichotomy between Islam and non-Islam (particularly targeted to Christian voters) also unhealthily used as political ingredients for both BN and Pakatan. Issue of Hindu temple demolition had sparked the Makkal Sakhti (People Power) revolution during the 2008 general election. This time around, Pakatan has been hoping that banning the use of the word “Allah” in Christianity as well as the Al-Kitab issue will do another impact against the BN. At other end, BN successfully did a prompt self-rescue by softening the government stand on Al-Kitab issue. In addition, portraying BN as protector of both Malay and Islam in contrast to “hardcore” PAS remain its evergreen propaganda to scare off both Islam and non-Islam voters to support PAS. Political issue followers may still remember an interesting comment of Dr. Bridget Welsh on the previous 2008 general election. She did not anticipate the political tsunami to happen during the 2008 election until she noticed a rather new phenomenon occurred then – the flags of PAS, PKR and DAP being tied together and cheerfully carried around by groups of Pakatan supporters consisting Malay, Indian and Chinese. This phenomenon of cheerful co-existence between PAS and DAP is deem “impossible” prior to that but are now a common sight. Hence, is hopeful that this is a clear sign of a new Malaysia political landscape from communal politic to genuine multiracial harmony.

In conclusion, both sides may be claiming victory but who is right and not is a matter of perception. Yet, the mentioned five happening in the 10th Sarawak state election may be the sign of another political tsunami in the making. It is in the interest of the BN to defuse it to remain “unmovable”. Pakatan may wish to capitalize on it to re-spark their “unstoppable” force to march towards Putrajaya. Thus, please brace yourself for the Battle II of “unstoppable Pakatan against immovable BN”. Readers who interested to read the Battle I can do so at either Malaysiakini website (subscription requirement maybe needed) at http://www.malaysiakini.com/letters/87496 or longer version in this blog at http://varietymalaysia.blogspot.com/2008/07/malaysian-politic-of-unstoppable-forces.html. 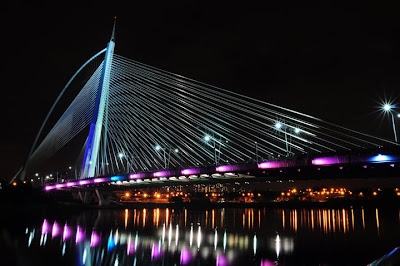 Debating military affair in the presence of King Xiaocheng of Zhao (reigned 265-245 B.C), the lord of Linwu claimed the essential point in the art of military are utilizing the most seasonable times of heaven and most profitable aspects of the earth, observe the movement of enemy, set out after he does, but get there before him.

Xunzi, a Confucian philosopher during the period of the “hundred philosophers” in China beg to differ. He believed that the basis of all warfare and undertaking lies in the unification of the people under the benevolent leader. To him, if the bow and arrow are not properly adjusted, even the most famous archer could not hit the mark. If the six horses of the team are not properly trained, even the most famous carriage driver could not go far. If the officers and people are not devoted to their leaders, even the sages could not win victory. In contrast, a tyrant may practice deception but only success against another tyrant if their plot is relatively better but will fail against a benevolent leader.

In Penang, one may find such benevolent leader in its current Chief Minister, Lim Guan Eng. After his Pakatan Rakyat team won the mandate to form state government in March 2008 General Election, Penang state prospers greatly. His benevolent leadership has been noticed until even Hong Kong TVB made a documentary on him. The documentary can be viewed through the following links.