We need to switch on our political consciousness


Come Saturday, thousands of cities, towns and municipalities all over the world will put their lights out for one hour 8.30 am local time. The organisers believe that this switching off of lights towards natural darkness is a vote for the future of earth against global warming.

While the Earth Hour campaign is celebrated, a possible ‘political lights out’ ten days later in Malaysia may not.

After the triple by-election on April 7, ousted Perak Menteri Besar Mohammad Nizar Jamaluddin as well as Pakatan Rakyat could face a political blackout. But perhaps, could it be that Umno would experience a political knockout?

Could the battle of an unstoppable Anwar Ibrahim against an immovable Barisan Nasional (BN) finally come to an end soon?

Nevertheless, the most regretted happening is the gradual, unconscious ‘lights out’ of Malaysian political consciousness. Following are three examples.

Firstly, election goodies are easy bait. Community projects like building hospitals and schools are not government efforts anymore but credited to a political party/alliance.

The most common slogan used is ‘Satu Lagi Project Barisan Nasional’. Malaysians fail to realise that these projects are part and parcel of the role of any elected government and are funded by public money.

Secondly, we are taught that giving gifts with the intention of getting some reciprocal reward (in contrast to merely showing appreciation) is akin to bribing. So are not elections goodies some form of bribe?

And how about rent-seeking as in the Approved Permits (AP) case? How about the findings outlined in the annual auditor-general’s report? What about the Lingam tape scandal?

Malaysian have easily forgotten all these cases after the BN government’s aggressive marketing of the latest anti-corruption body, the Malaysian Anti-Corruption Commission (MACC).

Hence, where is the Malaysian consciousness on ethics? Have we switched off the lights on our sound judgment?

Thirdly, we protest against political crackdown in Myanmar, the invasion of Iraq and the aggression in Afghanistan, to name a few. Malaysia champions for democracy.

Then, how on earth do we justify detention without trial under the ISA? Can we justify aggression towards peaceful demonstrators? How about restriction on speech, banning of opposition party organs and curbs on religious freedom?

In the first place, it is disharmony that gives strength to protest, criticism and debate all of which are need for the process to seek a new equilibrium towards stronger unity and more lasting harmony.

Yet, BN has been successfully using their tricks to pain a negative connotation of opposition-inclined Malaysians and many duly follow this line without giving it much thought.

Hopefully, Malaysian will switch off their lights for Earth Hour but not the light of their political consciousness.

Democracy at uncharted areas: A Joke or valuable discovery?

In the 12th general election, which is dubbed as “political tsunami”, years of Barisan Nasional (BN) dominance in Malaysian politic was suddenly crashed by the opposition alliance’s people power. Ever since, democracy system in Malaysia has been exploring uncharted areas day by day.

The latest or perhaps also the most interesting is the Perak saga. Among those uncharted areas include phenomena of “jumping frog” that led to the case of two opposing Menteri Besar (MB), questioning the legitimacy of each other. The case is hence dubbed “MB vs. MB case”. Another one is today emergency sitting of Perak state assembly which held under a tree! Hence, some Pakatan supporters dubbed the tree as "pokok demokrasi" (democracy tree) (Ong 2008).

The ongoing Perak saga again and again throw fresh doubt about BN’s integrity as well as neutrality of law enforcement authority (the police, particularly). In this case, should the BN go all out to stop the state assembly? If the BN "order" the Pakatan state assemblymen to wait and settle dispute in court, why not they wait and prove their legality in the court first before declaring their are legal state government of Perak?

Anyway, the below picture may worth thousand of words on democracy in uncharted areas… but whether the happening is a worth discovery or a shameful joke is yet to know. Perhaps, time will tell. 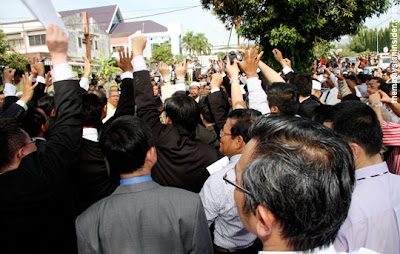