Economics and Politics of Fear 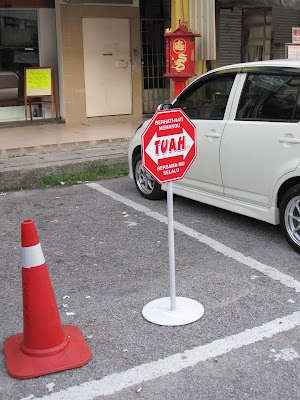 In Malaysia, it is common to hear parents warning their children of not to disturb fierce people for their own safety. The “fierce” includes the like of road bully, gangster or anyone look forceful. Thou cannot speak the truth or act rightfully against them if wish to live. This is a shameful mocking of ethic and justice.

In almost every corner of this country you can see fierce people particularly those operate car repair shop, hardware shop, eatery and roadside car wash station illegally occupying public parking spaces. In Ipoh town, almost every road has fierce car jokey to “help” you park and guard your car with a “fees” deem being paid “voluntarily”. Anyone dare not to pay up the fees? 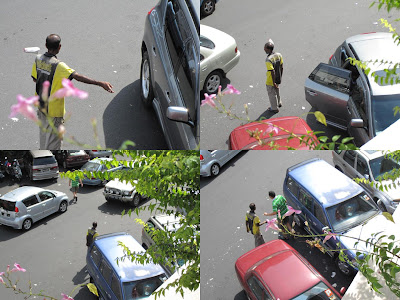 Well, these people may not necessary look “fierce” yet scary enough to strike fear into us. Therefore, “fear” has been the tool for economic gain. Many are willing to pay a small sum of money to buy peace of mind, just like buying accidental insurance. This may not cause the payer much but it is big business for the collectors. Many may not wish to take so much trouble to complaint about an illegally occupied parking space. Some may even (mistakenly) acknowledge that car repair shop and hardware shop are entitled to those parking spaces that block their entrance.

What can we do to condemn those queue cutting drivers? Many are either too lazy or too fear to even give a disproving honk? Subsequently, we are fertilizing the growth of road bully that cause unnecessary traffic jam to mat rempit and criminal offences. Besides, one may see plenty of “Ah Long” (loan shark) advertisements illegally pasted all over. It is an eyesore yet the authority either did not take action or taking too little action to solve this matter. Hence, fear plus ignorance and greed (e.g. taking corruption, maximizing own profit or convenience) is sickening.

Manipulating fear is also an efficient strategy in politic. Parents and friends may have repeatedly warned us not to criticize the government or speak of so-called sensitive issues. Same as the current BN government and the police warn Malaysian citizen. Yet, their definition of “sensitive” is double standard and themselves are the master of manipulating political fear to maintain their political colonization. Therefore, in Malaysia, you may have the freedom of speech but not the freedom after speech.

What is actually means by “fear”? How political evil can manipulate it to their advantage?

In his Treatise on Rhetoric (translated by Buckley, 1995: 121 – 127), Aristotle described fear as a sort of pain or agitation, arising out of an idea that is evil, capable either of destroying or giving pain. However, people only fear those whose effect is either a considerable degree of pain or destruction and these (pain or destruction) are not far removed, but give one the idea of being close at hand, so as to be on the eve of happening. Generally human are emotional beings, thus are subjected to fear. No matter how the rational mind tells us that there is nothing to fear about, the feeling of fear still exists naturally especially if the event of fear seems close by.

The late chief monk of Malaysia, Dhammananda (2003: 9, 10 & 11) explained that fear is an intense emotional reaction characterized by attempts to flee from the situation, imprison and ensnare the mind and flourishes in the fog of ignorance. Therefore, presenting issues of fear to voters and presenting self as the sole savior at the same time might just easily make the voter flee from the fear elements without rightful rationalization and then, leave them no choice but to pledge their vote to the only “savior” party available. Otherwise, there will be unfavorable or negative consequences.

In political rhetoric, ad baculum fallacy that appeals to fear is widely practiced, including in Malaysia. In a democratic country, any voters are supposed to have the right to make their own choice. Alas, ad baculum type of appeal is violating a democratic system because the listeners are not making their own choice or decision freely but like being pointed a gun to their heads to make a choice or decision to the aggressor’s will. For example, President George Bush administration blatantly using the fear of terrorist as a political weapon against the relatively liberal Senator John Kerry in the United States Presidential Election in 2004 (Luis 2004). The Nazis used to send the following notice to German readers who let their subscriptions lapse: "Our paper certainly deserves the support of every German. We shall continue to forward copies of it to you, and hope that you will not want to expose yourself to unfortunate consequences in the case of cancellation" (Grunberger 1971).

In Malaysian 11th General Election in March 2004, Barisan Nasional (BN) has used fear tactics to scare Chinese voters against voting for the opposition front. Through mass media which they strongly control, BN successfully trigger fear in Chinese voters by contrasting their comfort zone against the “peril” of voting for the opposition front that have Islamic party of PAS as member. Four themes were politically played up, namely (i) “peace” versus “chaos”, (ii) “freedom” versus “restrictions”, (iii) “development” versus “backwardness” and (iv) “moderate BN” versus “radical PAS–DAP-PK” (see Lim & Har 2008).

Those themes sound familiar? Perhaps, current happening in Malaysia communal politics mirror the strategy of fear. Perkasa and Malay newspaper, Utusan Malaysia have been non-stop fanning up racial tension, perhaps with the hidden evil intention of creating fear in Malaysian public. Firstly, it seems that they wish to plant to Malay ethnic the seeds of fear of losing superiority (ketuanan). Secondly, they seem wish to fear off the non-Malay especially the Chinese of possible Malay’s revolt if they vote Pakatan in coming election. The biggest question mark is how come the BN government that promotes unity under “1 Malaysia” concept did not take stern action against Perkasa and Utusan? Furthermore, UMNO is the majority shareholder of Utusan group too! Some more, Malaysiakini reported that the government has directed Utusan Malaysia to attack the Pakatan Rakyat’s Buku Jingga that highlights Pakatan’s plan if given mandate to form government.

Fear is planted into academic world by government suppression through various restrictions imposed on members of academia like laws such as the Universities and Universities Colleges Act (UUCA) and the Statutory Bodies Act, plus the need to have teaching permits for lecturers. However, the greatest weapons of fear used by the Malaysian government are the draconian Internal Security Act 1960 (ISA) that warrant detention without trial and Sedition Act that can be misused subjectively.

Sadly, Malaysians are now occasionally being reminded of the May 1969 riots, another favorite input for fear strategy. That black incident in our shared history is linked to three issues, namely

Ketuanan Melayu, the New Economic Policy (NEP) and the Islamic state. These issues in themselves shouldn’t pose any problems if they are not politicized and manipulated by unscrupulous politicians. An example of unscrupulous politician is Ibrahim Ali, President of Perkasa who declared that Malay is willing to wage crusade against the Christian in Malaysia. Doesn’t he understand that our muhibbah spirit helps to nurture a harmonic, multicultural Malaysian society that is the envy of many nations around the world? Indeed, it is a surprise that Hishammuddin Hussein, the Home Minister (who himself was the center of the keris issue some time ago) quickly make it clear that Ibrahim Ali did not represent the view of all Malay.

I have wrote previously that the beauty of Malaysians today is we can all sit down and discuss our issues like the adults we are. There is absolutely no place for the politics of fear in our society. The government should give the people more credit than to scare them with outdated, archaic mechanisms, whose ultimate goal is not to keep peace but to stifle freedom of speech. Instead of resorting to fear, the government might do better by listening to the rakyat and giving them a fair chance to express themselves without fear.